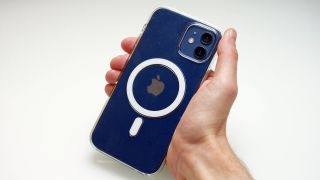 Apple traditionally refreshes accessories including iPhone cases and watch bands around this time each year, and a new leak points to some of the colors we can expect to see on new iPhone 12 MagSafe-ready cases: light blue, light green, a pale orange and purple.

The sneak preview comes courtesy of a reputable source on Chinese social media site Weibo, and the two-tone color swatches were then reposted by well-known tipster DuanRui on Twitter for an even wider audience.

While we can’t confirm the veracity of the information for now, if you’re thinking about buying an Apple accessory then you might want to hold off for a week or two – especially if you like the shades on offer here.

The latest on the iPhone SE 3
PS5 shortage reasons and fixes
A glimpse of the Spotify Car Thing
These case colors are similar to revamped ones pushed out for the iPhone 11 last year, although the purple one is new. Based on previous years, it’s possible that we’ll see new Apple Watch straps using the same colors as well.

Bear in mind that these aren’t completely new products: they’re just updates to the accessories that Apple already sells for its smartphone and smartwatch, and they will of course be compatible with the latest models.

The leak is a reminder that we’re expecting Apple to hold a launch event of some description in the near future. We originally thought it might be happening in March, but March came and went without any Apple showcase.

There are some strong suggestions from a variety of sources that the event will at last take place at some point in April, although that’s really as precise as we can be for the time being – stay tuned for future updates.

If and when a launch does happen, besides the accessories we’ve already alluded to, we’re expecting to see new iPad Pro models, new iMac all-in-one desktop computers, new editions of the AirPods, and the long awaited Apple AirTags Bluetooth trackers.