New York City, NY, 15th March 2022, ZEXPRWIRE, SOM Talk Live brings in the new season with a new addition to the show! The new cohost Llauryn Hendrix will now serve as the counter part to host Rueben Wood. The decision to add a new host to the show comes as SOM Talk Live gets picked up by cable network, Noire TV. Now airing in several countries on Linear TV, SOM Talk Live, has become the go to late night show before the late night show. 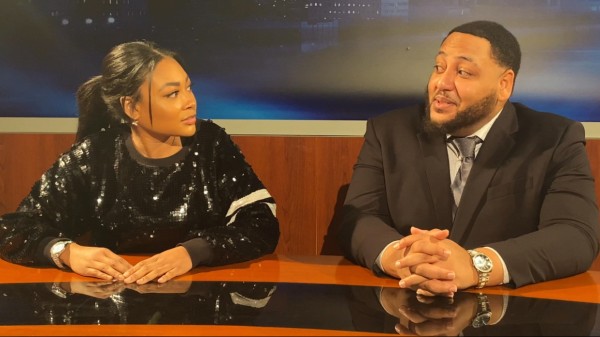 The SOM Talk Live show focuses on entertainment and business with some of today’s leading influencers, entrepreneurs, entertainers, and musicians. Now viewers can catch new episodes every Wednesday night at 10pm EST. Via Verizon Fios Channel 269, Optimum Channel 1100, & Digicel Channel 564 & 714. SOM Talk Live’s target audience is a fast growing segment of the population known as Global Black, since its partnership with Noire TV. This addressable audience constitutes all geographically dispersed people of African descent and is anchored by the 43M+ people of African descent in the US. The Global Black population is synonymous with the African Diaspora and exists on every major continent.

“Llauryn Hendrix” is a triple threat actress/model/personality making strides in the Entertainment industry. In just 1 year, Llauryn has secured successful features in multiple fields including TV/Film, Print and Commercial Modeling, and Event Hosting. Among her accolades include leading roles in Big Krit’s “Pay Attention” video, Darron Jones of 112 “Baby for Christmas” and Cover Model of Soft & Beautiful Silky Hair Care products. What separates Llauryn from the rest is her restless attitude towards achieving her goals. She is a published, well-respected Entertainer, who is quickly breaking barriers for women of color in the competitive industry.

Born in Birmingham, AL by way of Huntsville, Llauryn Hendrix is a perfect mixture of brains and beauty. This Alabama State University graduate of Communications, with a concentration in Television and Film, will blow your mind with her outgoing personality and witty conservation. As a model, correspondent and media personality, Llauryn reigns as a triple threat in the world of communications and brand endorsements. Some of her recent work includes featured roles in the TV and Film industry such as Ride Along 2, Flight, The Neighbors, The Game, and Vampire Diaries, and Single Ladies. She has worked with celebrity photographers such as Drexina Nelson, Derek Blanks, and Jeﬀrey. In addition to this, Llauryn has served as the oﬃcial Face for notable brands including The Sugar Mafia Company, Radar Magazine, Strength of Nature, Ellements Magazine, Wildin Out girl and ors olive oil Steele Boutique.

Wood welcomes his new cohost and the new dynamic added to the show and energy brought on screen with between the two. With a female counterpart SOM Talk Live has now created a modern feel for late night television across the board.

How to Buy a Gift With Cryptocurrency